To share your memory on the wall of Francesco Altamura, sign in using one of the following options:

To send flowers to the family or plant a tree in memory of Francesco Altamura, please visit our Heartfelt Sympathies Store.

We encourage you to share your most beloved memories of Francesco here, so that the family and other loved ones can always see it. You can upload cherished photographs, or share your favorite stories, and can even comment on those shared by others.

Posted Dec 26, 2020 at 09:28pm
Dear Altamura and Cantatore Families
Our family would like to extend our heartfelt condolences to you and your family. We will always remember your Father for his Love his kindness and care for everyone. He was truly a man who should be honored in a Grand manner which I am sure all of you will do. We wish we could be with you but unfortunately due to Covid and our inability to be with you physically you will be in our hearts and our prayers each day as you grieve the loss of this beautiful man your Father your Husband your Brother your Grandfather your Uncle your Friend. He will be missed, we know he will be with the Lord and the Madonna in eternal Peace and Rest in Heaven. Loving you always Eloise Bruce Kristey and Austin Palmisano
Comment Share
Share via:
M

Posted Dec 25, 2020 at 02:02pm
Deepest and sincerest condolences to the Altamura family.

May la Modonna Dei Martiri meet him with open arms and may her cape cover the family with love.

Posted Dec 23, 2020 at 10:42am
May the memory of how blessed he was to be part of a close and loving family help you to feel his love and spirit with you always. Our condolences. 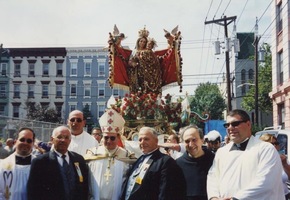