To share your memory on the wall of Thomas D\'Alessandro, sign in using one of the following options:

Born on April 22, 1959 and raised in idyllic Pine Brook, New Jersey, Tommy’s childhood was filled with wholesome fun - sneaking rides in the bread truck, playing pickup games at the ball field with his neighborhood full of lifelong friends, selling lemonade alongside his doting big sister and entertaining his gaggle of cousins in the family pool.

His fandom for the New York Yankees propelled Tommy’s passion for baseball at a young age. A 1977 graduate of Montville Township High School, Tommy captained and earned 7 varsity letters in baseball and football, where he was named All-Star First Team in multiple newspapers for both sports. Tommy was a 1982 graduate of Montclair State University.

Tom met and married the love of his life, Carol Romeo in 1984. Together, they forged successful careers and enjoyed their life together in Wayne, NJ. They built lifelong relationships with many friends. They traveled the world and often frequented their two favorite vacation spots, St. Thomas and Hawaii.

He is survived by his beloved wife of 35 years, Carol and his devoted sister, Denise Cocozziello. He also leaves behind in-laws Frank and Josephine Romeo, sister-in-law Lisa Romeo Hall and her husband Jeffrey. His cherished nieces and nephews include Marlena Hidlay and husband Will, Rickey Perez, Jason and sister Rachel Hall, and his young great-nieces Addison, Claire and Brienne Hidlay. Tom was predeceased by his adoring mother Fay (1999), his loving father Thomas Frank (2016) and his brother-in-law Carmine Cocozziello Jr (2015).

Tommy was supported and loved by all who knew him. He will be missed by his cousins and friends who have fond memories of him, spending summers at the Jersey Shore, playing in countless sports leagues, attending Springsteen concerts and cheering on the New York Giants.

Due to the current health crisis, a private ceremony will occur on May 5 at Kimak Funeral Home followed by a burial at Glendale Cemetery in Bloomfield. A public celebration of the life and legacy of Tommy D will take place at a later date. Arrangements at Kimak Funeral Home, Carlstadt.
Read Less

To send flowers to the family or plant a tree in memory of Thomas Louis D'Alessandro, please visit our Heartfelt Sympathies Store.

We encourage you to share your most beloved memories of Thomas here, so that the family and other loved ones can always see it. You can upload cherished photographs, or share your favorite stories, and can even comment on those shared by others. 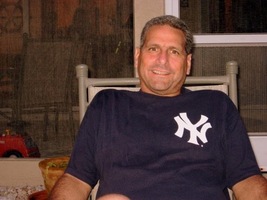